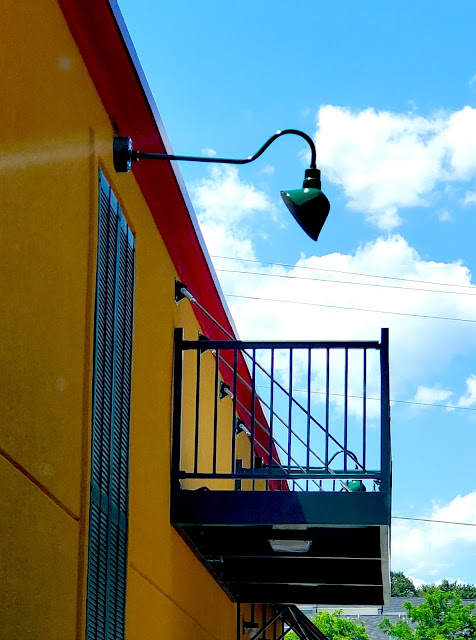 This architectural abomination hangs off the side of a Popeye's restaurant, and extends out over the drive through lane.

What the hell is it? Why is it there?

Clearly, it's designed to invoke the balconies one would find in New Orleans. But, can anyone go stand on this thing and hoot and holler and throw things? No, because that would mean they would have to get on the roof of the Popeye's and then jump off said roof and stand on a rickety balcony that has no function. This is just sad.

I can imagine a scenario where someone shows up at Popeye's drunk, and climbs up onto the roof where they actually do have a ladder. Then that person shimmies over to the balcony and falls down onto it. They stand up, dazed, and the whole thing collapses onto a Ford Escort parked at the drive through window. Everyone is injured, but not severely. Just enough to be a nuisance, you see.

That's the Popeye's drive through balcony. Just enough of a mistake to be annoying.
- July 13, 2020