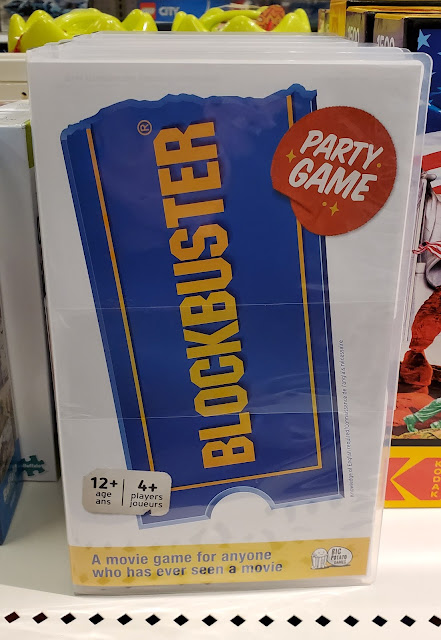 The Blockbuster Video Chain was a horrific company, a blight upon the American retain landscape. It was easily the worst company of the 1990s and early 2000s (says me).

Who is nostalgic for anything related to Blockbuster? This is a picture of a game you can play in your home. Why would you want anything with the blue and yellow logo of eternal evil on it? I see the Blockbuster logo and I see red.

Get rid of this shit, man. There should not be any of it left. When they closed those stores, think of all the Blockbuster bullshit that was thrown away. The signs, the bags, the bins, the display cases, the shelves on the wall. Think of all the stores they once had. A lot of them are now Panera Bread stores or places where you can get vaping crap. There should not be any of this, it should all be gone. They should set all of their remaining merchandise and mementos on fire and disappear into the sordid annals of history, going the way of those stores where people sold belly slaps and gum that didn't work.

I'm still mad about having to pay late fees. All of America should still be angry. I'm still giving Netflix money because that's what killed Blockbuster.

Why would you play a game like this? You should fling this goddamned thing into the rafters. It's not safe to start fires in stores, so don't do that. But, shit. Where was this considered a good idea? In a pitch meeting attended by people who didn't have to live in a country where there were no good movie stores and where a Blockbuster video store was just there, like a blight?

Don't you remember going there and being forced to wait to get movies? You'd have to sweep in and try to get a new release. You might have to move up and down the aisles like a shark and wait for a dopey kid to put a just-returned copy on the shelf. Then you would have to wait in line to rent it. Oh. I can't rent it until I pay late fees? Well, goddamn.

Don't get me started on what it was like to rent a movie and find out some idiot had put the wrong movie in the wrong box. Or that they had failed to rewind the damned thing.

Fucking late fees. When am I getting over them?