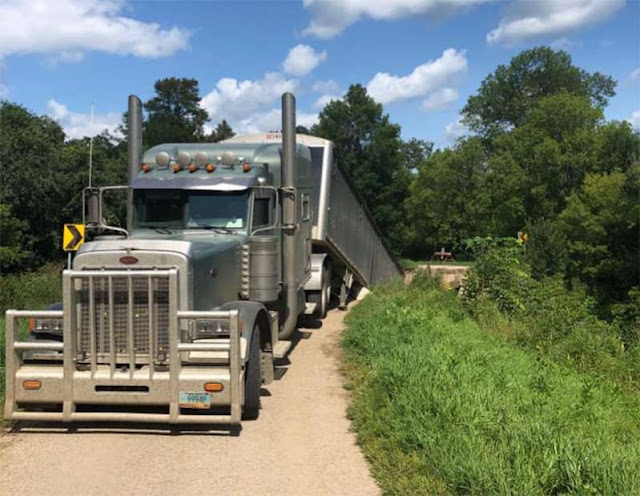 Dumbass:
A historic bridge in North Dakota, built in 1906, collapsed Monday after a tractor-trailer hauling beans and exceeding the weight limit drove over it, the Grand Forks County Sheriff's Office said in a statement.
The bridge, which is on the National Registrar of Historic Places, spans the Goose River and is rated for 14 tons of gross weight, which is marked on the structure, according to the sherrif's office. The weight of the big rig was just over 43 tons, or 86,750 pounds, the sheriff's office said.
Officials estimate it will cost between $800,000 and $1 million to replace the bridge.
The driver of the 2005 Peterbilt truck was identified as Michael Dodds, and he was not injured. An overload citation of $11,400 was issued, the sheriff's office said in a statement.
The bridge type? Well, it was a half-hip pony truss, of course! Of course! And Pratt made it, I guess.
I had no idea that was even a thing. Is it infrastructure week? Because we certainly need an infrastructure week, and soon.
- July 23, 2019