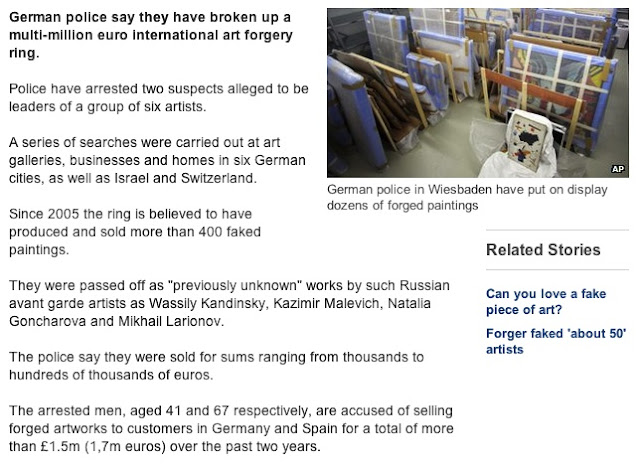 There has to be a moment when someone who has spent a lot of money on art realizes that they have purchased a forgery. That moment has to be a difficult one (the ultimate 'wealthy person's problem). Many of those moments are coming.

The number 400 seems low to me, but this could be based on the records of the forgers (why would they keep good records? why wouldn't they lie in order to reduce the extent of their crimes?). Greed would, I would think, drive this market and it would have driven these people to supply their clientele with works that could sail under the radar and keep the lucrative process of spreading fakes throughout the European art community flourishing.

How many families now realize that their works of art are crap? Will they suffer the embarrassment of admitting that they were taken? That they spent their money in this manner? It would come down to who is more status driven and who has been trying to appear sophisticated to their neighbors.
- June 14, 2013