How Many More of These Movies Do They Have to Make? 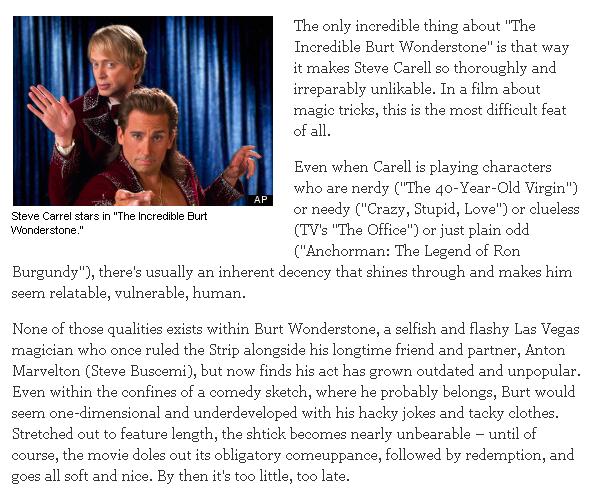 Movie reviews are usually meaningless pieces of direct marketing; are there any decent film critics left? Who is reliable? Anyone?

Here comes another Steve Carell film that probably shouldn't have been made. Apparently, he plays an unlikable character who goes all soft at the end. If that's how The Incredible Burt Wonderstone is supposed to be, what's the point of it all?

The film format requires some variation on delivering the transformative character journey. We see a bad person, we see the things they go through, and then, at the end, they are redeemed. This describes the formula that is required before a film gets made. And yet, some of the best stories on television feature people who learn nothing, refuse to grow, and end up accomplishing nothing. How is it that television is now more daring than cinema?
- March 13, 2013 No comments:

A Sunstone With No Direct Connection to the Vikings?

This is a very neat story, but something goes amiss when you discover that the sunstone that was found had virtually nothing to do with the Vikings. That's because it was found in the wreck of a British vessel dating from the 16th Century.

It does indicate that the sunstone could very well have been a useful tool for mariners, albeit really only when it was cloudy or overcast while attempting to fix a position while at sea. A better attempt should be made to correlate how the Vikings sailed long distances with primitive positioning devices; that would make the discussion about the use or utility of sunstones easier to accept.

The crux of all of this rests on allegorical evidence from Iceland, which is where the mineral that makes up the sunstone originated. Icelandic spar is shown to fix the position of the sun on cloudy days and thus, through a series of coincidences and conjecture, we have come to accept the theory that this object assisted seafaring Vikings.

When someone actually finds a sunstone in the wreck of a Viking vessel, then we'll know if this theory is certain enough to accept. I don't think anyone would have been buried with their sunstone; it seems unlikely to me that an object useful for navigation and essential for other members of a group of Vikings would part with such a thing. This is why I don't think that finding a sunstone in a Viking grave would really fully explain anything. It certainly could, but right now I think we're dealing with conjecture and the discovery of a sunstone in a British shipwreck doesn't adequately prove anything.

Writing Out the Bible 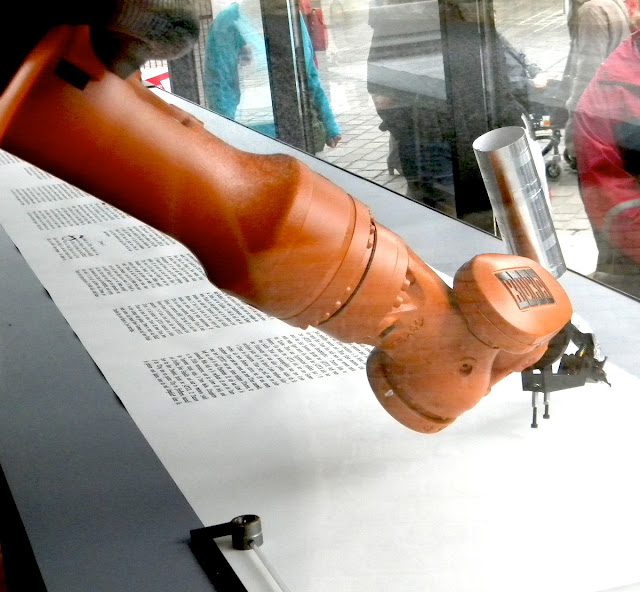 This is the famous robotic arm that is writing out the Bible in Gothic script outside of the cathedral in Trier.

It has been a good year and a half since I took this photo; is this still going on? What is the result of this project? And is it any good?
- March 06, 2013 No comments: