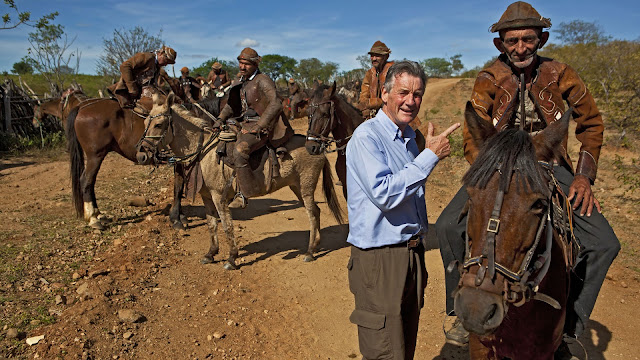 The next interesting thing from Michael Palin? Brazil:

The series was his idea. “I really hadn’t planned to do any more journeys, but Brazil auditioned itself very well. The economy is growing fast, the World Cup is there in 2014 and the real clincher was the Olympics in 2016. It meant that a country that had never had much attention from this side of the Atlantic was in the spotlight. So we applied to the BBC for a budget.”

Even for a man with his track record, however, there was no instant green light. “It wasn’t a given at all. I rather hoped it might be. But there are new people at the BBC, with new policies.” Still, he got the go-ahead and set off, he says, with the same spring in his step with which he embarked on his first travelogue, Around The World in 80 Days, in 1989. One thing that amazed him was the sheer size of the country: Brazil is twice as big as India. “And the distance from the Amazon to the south is like from here to Nigeria or something. We wound up telling Brazilians what other parts of their own country were like.”

In the next decade, Brazil will appear on the world stage in more than just those two ways. Aside from the World Cup and the Olympics, people are going to have to start asking serious questions about this nation, which is growing in both size and influence. In all of Latin America, is there any nation more important than Brazil?
- November 04, 2012

Email ThisBlogThis!Share to TwitterShare to FacebookShare to Pinterest
Labels: Commentary